Andy Warhol (1930-1987) was an American painter associated with the movement known as Pop Art.  It was called Pop Art because it used images from popular culture, like soup cans, comic books, or famous people from the movies.  Warhol wanted the subjects of his art to be familiar to people, so then he could show them to people in new ways or in new contexts so that we would look at them differently. 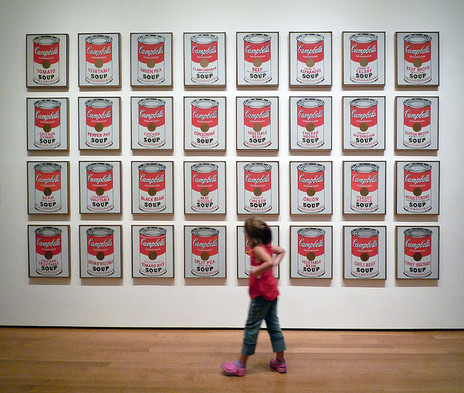 Andy Warhol started out as a very successful commercial artist, making advertisements and product designs, and won many prizes for his unique style.  In 1961 he came up with the concept of using mass-produced commercial goods in his art.  One of the earliest ideas he had was in making new renditions of ads and comic strips as art, but then he saw some of Roy Lichtenstein's comic-strip paintings in a New York Gallery (see Lichtenstein inspired project for 6th grade) and felt like he needed a new idea. 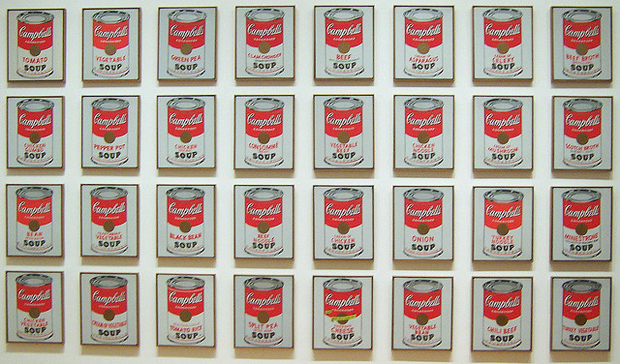 He asked a friend for some suggestions, and the friend said he should choose something that everybody would recognize like Campbell's Soup.  So Warhol went to the store and bought lots of cans of soup, which he then began to reproduce in art.  He would trace projections of the cans onto canvas and then used commercial printing methods like silkscreen and lithography to help create the mechanical precision he wanted.  That was another way he felt that art could be more familiar and accessible to regular people, by using methods of art they would recognize from their favorite products.

At first he painted each can on a separate canvas, which his art dealer sold individually to anyone who would buy them.  But soon the dealer realized the paintings were more effective hung in a group, so he bought all the paintings back and purchased the whole set for himself.  Later, Warhol would paint more versions of Campbell's soup cans, more often stacking them up on his canvas just like they would be stacked on a store shelf.

One time, when he was asked why he chose to paint Campbell’s soup, Andy Warhol responded, “I used to drink it [Campbell’s Soup]. I used to have the same lunch every day, for twenty years, I guess, the same thing over and over again.” 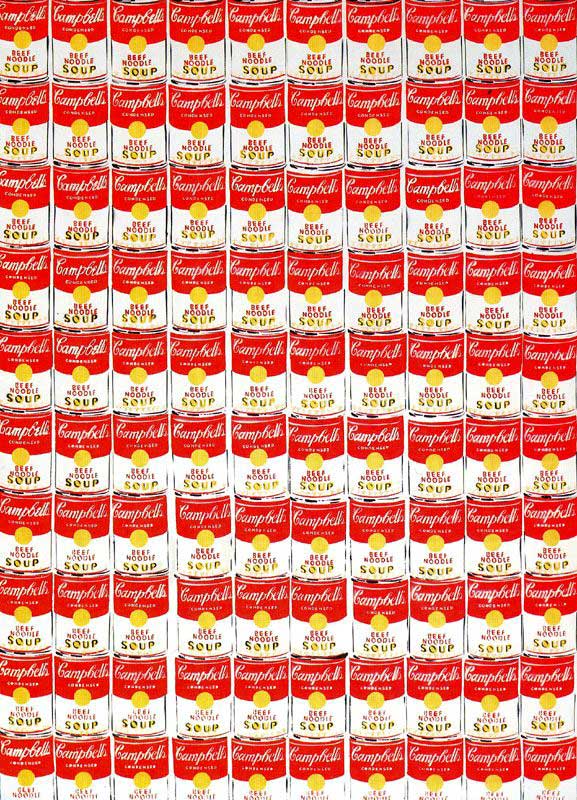 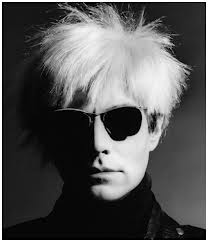 While many artists focused entirely on their art with no interest in personal fame or fortune, Andy Warhol wanted to be rich and famous. Some artists accused him of making art in order to make money. However, many of the images he created have become iconic in American culture (meaning they are so famous that everyone recognizes them). His paintings have grown in value as well. One of his portraits called Eight Elvises sold for $100 million in 2008.  Despite having made a lot of money off of his art, Andy can also be credited with bringing art to the masses. He would mass produce prints of his art so it was affordable to everyone. 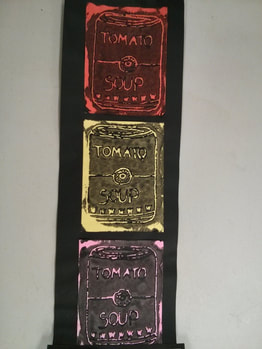 Lesson
1.   First draw a large soup can on the board for the class to see.  Go over where to put the lines to make it resemble a can, the circle in the center, and lines to the sides.  Also, have the students put some designs in the circle and at the bottom of the can.

2.   Have the students trace the soup can stencil on a scrap piece of paper and practice printing the word Tomato on the top part of the can and Soup on the bottom part of the can…backwards.  This is the hardest part for the students and this is why I have them do a practice paper first.  I draw the words on my soup can on the board backwards so the students can copy what I write.


3.  After they feel confident with their practice paper, I pass out a plate to each kid and have them trace the stencil and draw their can and details on the plate.  I explain that you must press hard to get a good indention on the plate, but not so hard they poke a hole in it.

4.  When they show me they are finished with this step I give them a sponge brush and black tempera paint to get started.  Students can share the paint and brushes.


5.  They need to put paint at the top of the plate and with movements only going down, paint over the impressed drawing.  Once it is painted they take one of their pieces of paper( I used a 4 and a half by 5 inch piece of bright colored construction paper) and had the kids press a piece over their painted area.  Make sure they put their names on the back of their pieces of paper. After pressing lightly, they can pull it up by a corner and see what they created.


6.  Sometimes it doesn’t turn out great.  Have the students press their lines again with their pencil, or they may just need to start over on a new plate.  I would make sure you have 2-3 plates per kid.

7.  The goal is to get 3 finished prints from each student.  Then I mounted them on a piece of black construction paper (you can see the stencil I made for the students to use.  I made 20 so they could share them).


*NOTE: alternative idea.  You can discuss with the children that just as Warhol used a soup can because everyone knew what it was and likely had a can or two in their own cupboard, today we have different things that are super popular and recognizable.  You could discuss ideas of what those might be for fourth graders (lego mini-figs, Hello Kitty, the Apple logo, McDonald's french fries, etc.).  You could have the students choose from a few ideas and, using the same process described above, make multiple prints of a current popular culture image.