George Catlin (1796 - 1872) was an American painter, author and traveler who specialized in portraits of Native Americans in the Old West.  He began traveling in Native American territory in 1830 and visited over 50 tribes in six years.  He wanted to paint the pictures of the Native Americans because he knew that their traditional way of life was disappearing.  Catlin often lived with different tribes for a period of time to understand them better and to be able to spend more time sketching them.  By the time he was done, he had over 600 paintings.  When he came back east, he used his art plus the artifacts he collected from his travels, along with stories of his experiences to teach other people about the Native Americans tribes.  His pictures are wonderful documents of the colorful details of Native American dress, accessories and customs.

What details do you notice when you look at the picture of "White Cloud?" 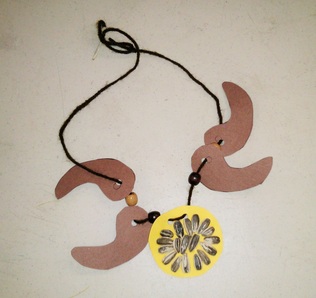 Glue bottles (in the classroom)

Yarn for necklace, 1 piece of 18 inches long per student