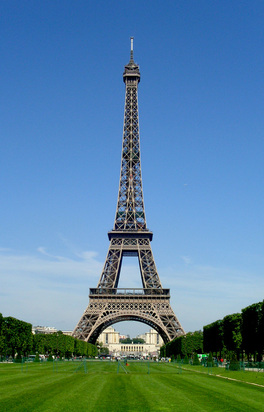 The Eiffel Tower was designed by a French engineer and architect named Gustave Eiffel (1832 - 1923) and was built for the 1889 Paris Exhibition (World's Fair).  At 984 feet it was the world's tallest structure at that time, over 400 feet taller than the Washington Monument in Washington D.C., which had previously been the tallest.  The Tower consisted of 7,300 tons of iron and steel connected by 2.5 million rivets.  It was a huge undertaking to build this large structure in the short amount of time the workers had before the start of the Fair.  As the Tower got taller during construction, the workers had to labor precariously, high in the air, exposed to the wintery coldness of the elements, and to try to weld the metal with near-frozen hands!

The height of the Tower added another challenge: although there are stairs (lots and lots and lots of them) to take you up to the various platforms, the builders wanted to include an elevator for the ease of all the visitors.  However it was hard finding a company who could design an elevator to go up the tilted angle of the structure.  In the end it wasn't the artistic French who found a solution, but an upstart American company from the United States!

People at first complained that the Eiffel Tower was ugly, exposing its structure the way it does, and that it conflicted with the beauty of Paris's historic architecture and grand design.  Other modern buildings were starting to use the strong inner structure of iron and steel, but they were covering it up with walls of various materials like stone and even glass, so when people saw the Eiffel Tower they thought it look almost naked!   They didn't like that.  But others claimed that the Tower looked honest and strong, and that its sleek design pointing toward the sky like an arrow was a great symbol of the modern industrial era, connecting the past with future.  The true test came during the Great Exhibition when the Tower was the most popular attraction, making it a HUGE success!  In fact, the people of France ended up embracing the Eiffel Tower so thoroughly that instead of tearing it down after the Exhibition as was scheduled, it still remains as an icon of Paris today. 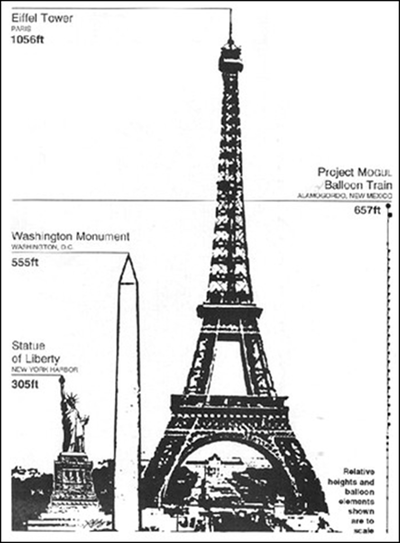 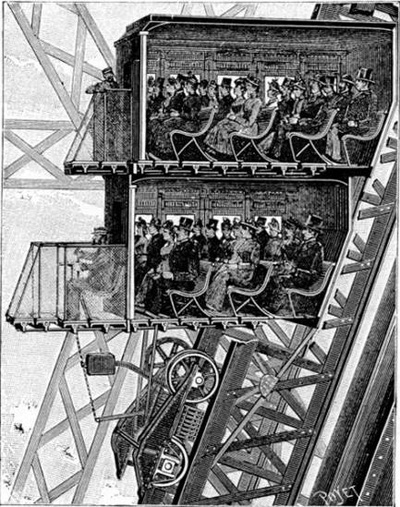 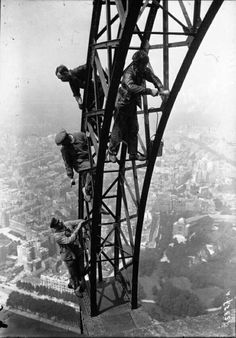 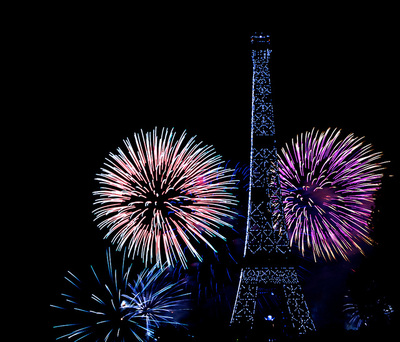 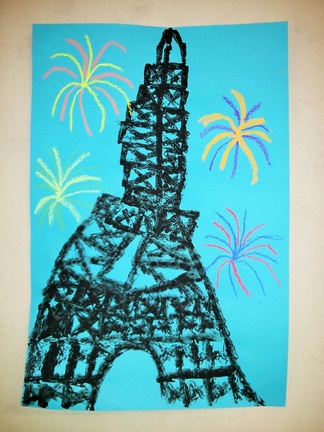 Large paint palettes (can be shared between students) 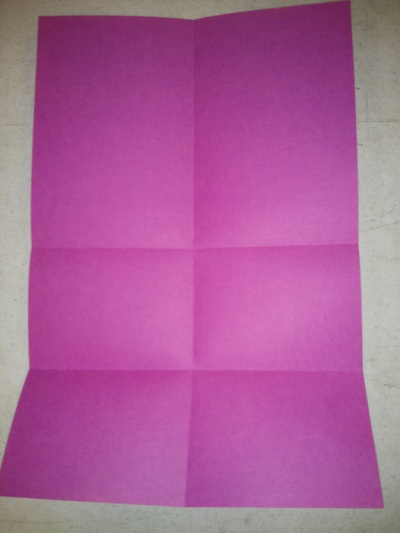 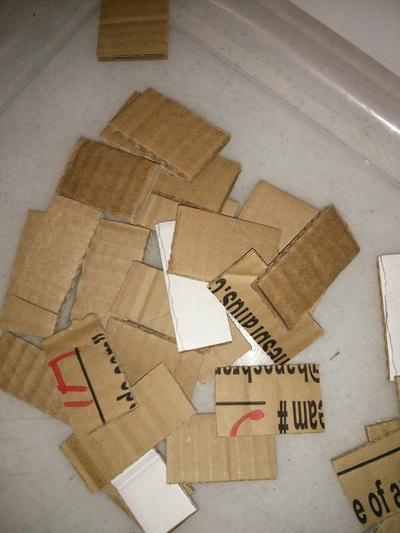 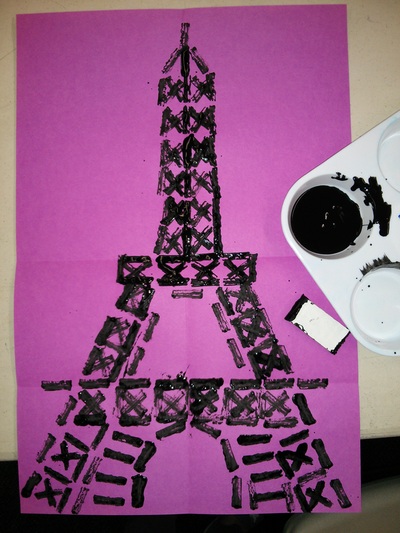 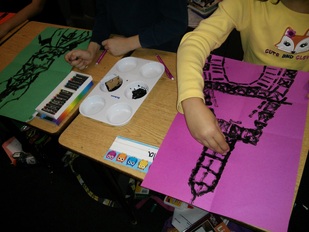 Lesson
1. Show students pictures of the Eiffel Tower and talk about its history and some of its notable visual features.

2. Explain that today they will be creating their own Eiffel tower with a print making process using pieces of cardboard.

3. Have the students orient their paper in front of them vertically (shorter edges on top and bottom).  Have them fold the construction paper in half, bottom to top.  Unfold, then fold the bottom to the new center fold line.  Unfold.  Now, switch the orientation, and have them fold the opposite sides (long side to long side, like a hot dog).  Unfold again.  See the picture above.  Use these fold lines as guides to create the main three parts of the Eiffel Tower.

4. Demonstrate how to "stamp" with the paint on the cardboard, and not to "draw" with it.  Dip the short edge of the cardboard piece into the paint and press it (stamp it) onto the paper.  It should not be dragged.  Show them that they can usually get several stamps with every dip into the paint.  If some kids stamp harder than others, they may need a replacement piece of cardboard to finish their design.

5. Have the students reorient their paper vertically in front of them.  Have them start with the skinnier part of the tower in the top half of their page, using the fold lines to center the tower on the page.  Have them freehand the design (no need to pencil draw first), using an "x" design to build the framework of the tower.

6. Use the lower folds as guidelines to place the other platforms of the Tower, not forgetting an arch in the bottom section.

7.  Oil pastels can be used to add fireworks in the background, if desired. 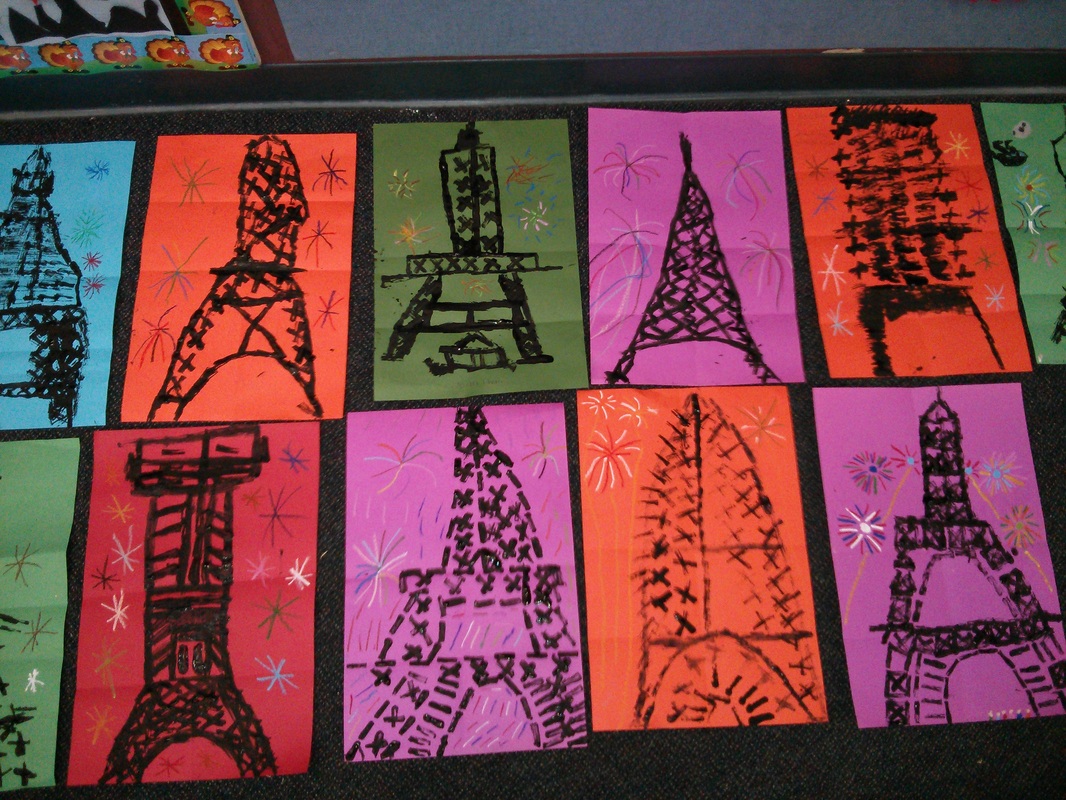