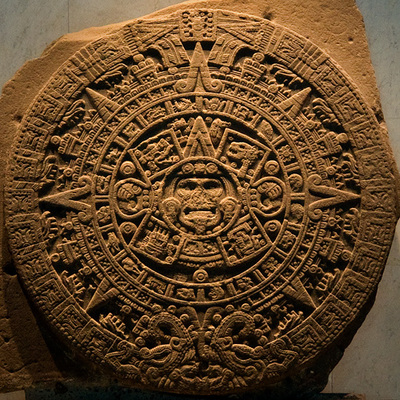 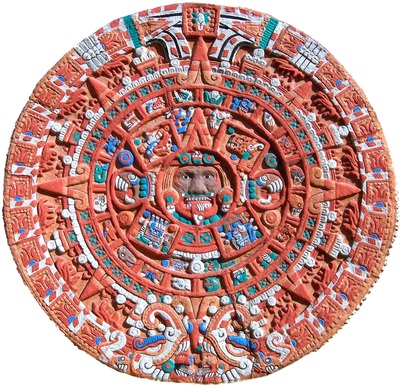 The Sun and its representation has been an important symbol to the people of Mexico for thousands of years, from the Pre-Columbian times until today.  The Aztec Sun Stone, or Calendar Stone, is perhaps the most famous work of Aztec sculpture.  In the center of the disc is the face of the Sun God.  Surrounding that center circle are other symbols and designs representing the different eras of the Aztec people.  The discovery of this stone proved that the ancient peoples of the Americas were smarter than many people thought--they possessed an advanced and remarkable knowledge of mathematics and astronomy. 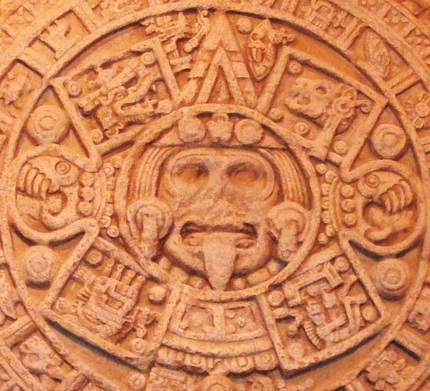 The face at the center represents the Sun God, called Tonatiuh, who was also called by the names "the shining one," "the beautiful child,"" the eagle that soars."  All of the important times and gods were symbolized by animals (like jaguars and birds) and natural elements (like the sun and rain).  Around the figure of Tonatiuh are the symbols of the Aztecs four-epochs. On the top right is the Jaguar Sun (Ocelotonatiuh) who symbolized the first of earth's four epochs. It was believed that in this era the world was inhabited by giants that were defeated by jaguars. On the top left, the Wind God (Ehecatonatiuh) symbolized the second era. At the end of that time there were many hurricanes and the survivors were  transformed into monkeys. The God of this era is Quetzalcoatl. The third era on the lower left of the center is Tlaloc the god of rain and celestial fire. It was believed that at the end of this time period there was a rain of fire, and men who survived were converted into birds. On the lower right of the center is the forth epoch, represented by the Water God, Atonatiuh. At the end of this era it was believed that there was a great flood and the survivors turned into fish. This epoch is represented by a vessel of water, and the goddess Chalchiuhtlicue.  There are many other intricate designs and symbols filling the rest of the sun stone, and they are carved in a precise, SYMMETRICAL pattern (radial symmetry actually--see radial pattern project).

The Aztec Sun Stone is now the showpiece in the Mexica room of the Museo de Antropologia in Mexico City.  It has become a national symbol of Mexico, and the Mexican people sometimes refer to themselves as People of the Sun. 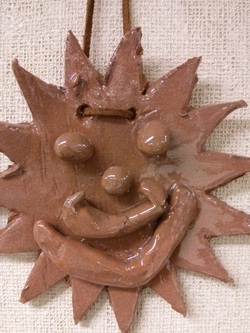 Prep – 2 hours (with 3-4 parent helpers it will take less time, you will also need as many parents as you can get to help the day of the lesson)

Plastic knives for each student

-each student gets their own slab of rolled out clay; have them lay the sun stencil on top and cut around the edges with a plastic knife.  Peel off the stencil when they are done.

-have them use the toothpick to write their name and date on the back of the sun.  Turn it back to the top.

-use the cutaway bits of extra clay to make eyes, nose, and mouth and embellish face

-remind them of the importance of scoring the clay (both the sun and the face parts), as well as using a fingertip dab of water to make sure the face parts adhere to the sun surface (there are handouts in the folder that help the students visualize this process) 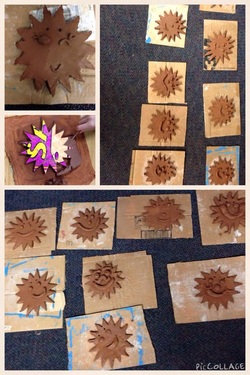 WARNING: DO NOT ALLOW CLAY TO GO DOWN YOUR DRAIN!
For more information on working with clay, see our media page on clay.
Powered by