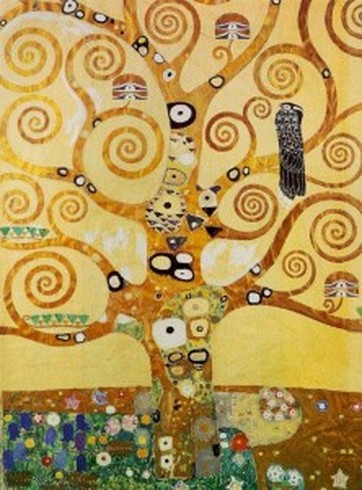 For this project we will be taking our inspiration from two separate artists and two different works.  Because we have another project in 5th grade based on Kandinsky's "Squares with Concentric Circles," we will focus on Gustave Klimt's "Tree of Life" here.

Gustave Klimt (1862 - 1918) was born in Austria to a poor, immigrant gold engraver. Klimt’s brother became a gold engraver like his father and Klimt began his career paintings murals and ceilings in buildings.  He created his images with lots of details that often look like jewels.  Also, during his most popular art phase, Klimt used actual gold leaf on all his paintings (that's why it's called his golden period).
Klimt is better known for his images of women, but he also painted landscapes.  The "Tree of Life" is his only landscape during his golden period.  The concept of a "tree of life" is an important symbol in many different religions and mythologies.  A tree of life can represent a connection between heaven and earth, or between life and death.  Take a look at Klimt's tree.  What do you notice about it?  The swirling branches or ornamental circles on the trunk and branches?  Why do you think he painted it like that?  Some scholars suggest the swirls suggest the complexity of life or perhaps how life goes on and on with children and grandchildren, etc.  Others suggest the tree is both strong (representing males) and delicate (swirls and jewels representing females).  Have they noticed the big black bird?  This is often a symbol of death, so the tree represents both life and death.  At the same time, the tree is really pretty and fun to look at, with its golden color and intricate details, it is almost magical. 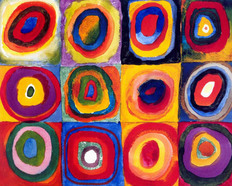 In our art project, we will be making a fanciful tree, like Klimt, but instead of the difficult swirls he painted, we will be making concentric circles (circles inside of each other), inspired by Kandinsky's painting.  To read more about Kandinsky and this work of art, check out the 5th grade project. 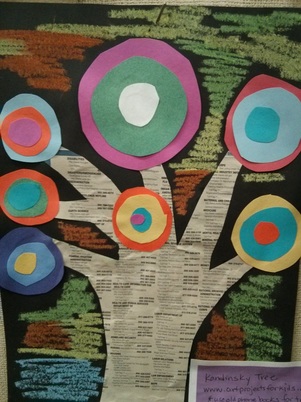 Scraps of construction paper (10 per student)

Scraps of scrapbook paper (5 per student)

Scissors (students may have scissors, but bring some for those who don't)

- pass out paper, have students put name on back in white crayon so it shows up

- pass out phone book pages or newsprint and have students cut out their tree (this may be hard for some students, so have extra pages in case they need to try a couple of times)

-when they are done with their tree, you can pass out different scraps of paper so they can cut out their circles.

-have students raise their hands when they are done with their circles, so you can make sure they have followed the directions and are ready to glue

-when students are done gluing on tree and concentric circles, they can raise their hand for chalk pastels, if there is time to color in the background (this step is only for those who finish early--it is not necessary)

*please have parent helpers put away supplies in the art room 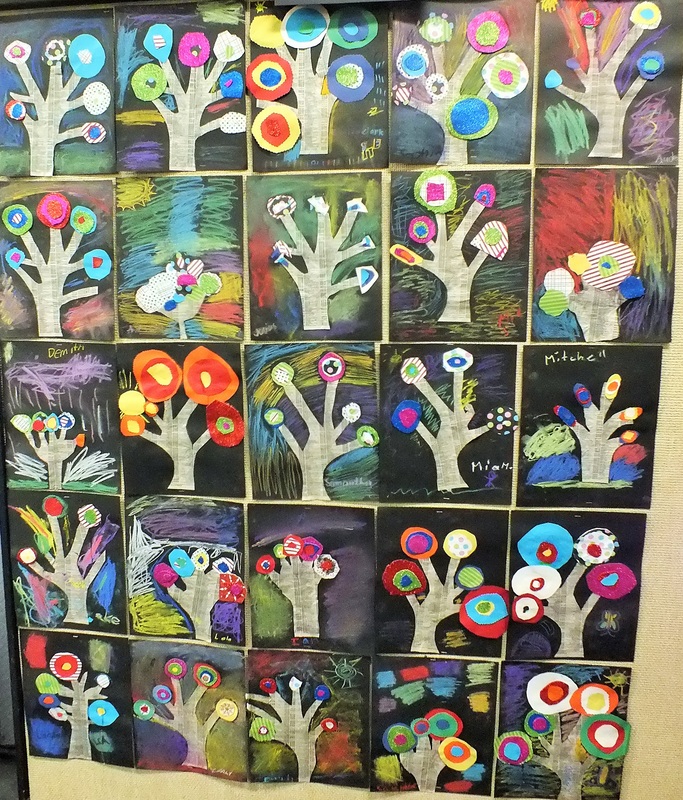