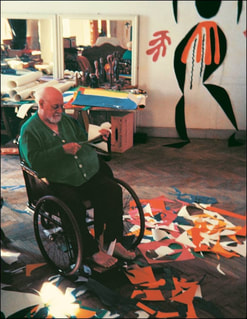 Henri Matisse (1869 - 1954) was a famous French artist because of his experimentations in ABSTRACTION and color (see also the 2nd grade project on Matisse).  Remember that abstraction in art means to "simplify, distort or exaggerate" forms in some way.  Matisse favored simplification.  He would work and rework a picture, going from complex to simple and then even simpler, as he stripped away nonessentials and extra details.  He wanted to get down to a subject's most fundamental qualities.

Matisse, along with Picasso, was one of the most important artists of the early 20th-century.  Both artists tried a lot of new ways to create art that was less realistic than what came before.  Picasso first experimented with FORM, by breaking up and fragmenting shapes to invent cubism.  Matisse spent more time thinking about the bold and expressive use of COLOR.  Matisse said that "color was not given to us in order that we should imitate Nature, [but] so that we can express our own emotions."

In his later years, Matisse was very sick (stomach cancer) and had to stay in bed much of the time.  He couldn't stand at an easel to paint anymore, but he still wanted to make art.  He had assistants paint large sheets of paper with bright colors, then Matisse would cut out fanciful shapes to be glued into large-scale collages.  He called this technique "painting with scissors" or "drawing with scissors."

All his cutout art expresses the same joy and freedom he had in the paintings he made before he got sick, and they clearly show the extreme simplification that he worked towards his whole life.  He wanted to find the core truth of an object (not what is LOOKED like, but what it WAS in essence), and then he tried to present it in a visually meaningful way.  He said that these paper cutout pictures finally "attained a form filtered to its essentials." 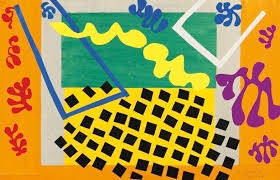 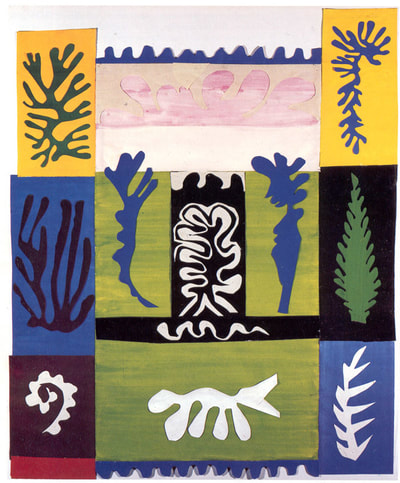 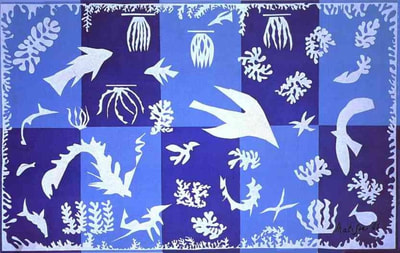 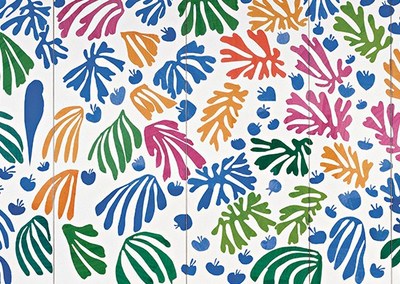 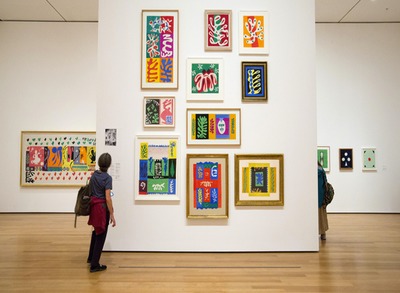 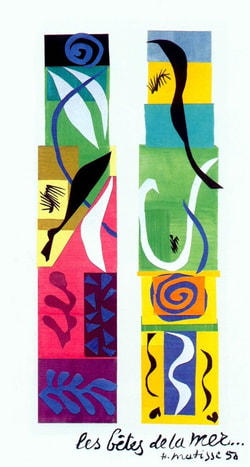 Beasts of the Sea (Les bêtes de la mer), from 1950, is a great example of this paper cutout style.   Notice how he uses bright colors carefully so they play off of each other and create vibrant contrasts.  He also uses simple, playful shapes that don't exactly look like "beasts of the sea" but certainly suggest the life and energy below water.  Everything has been simplified to basic lines and shapes, but they are specific lines and shapes that, together, generate the mood and feeling of the piece.  Notice the layering of patterns that evokes the idea of movement from waves or currents, and the swaying of seaweed, kelp or other plant life.  Other details suggest fish, shells, coral, and other sea life (possibly shrimp? seahorses? jellyfish?).  What do you see when you look at this picture? 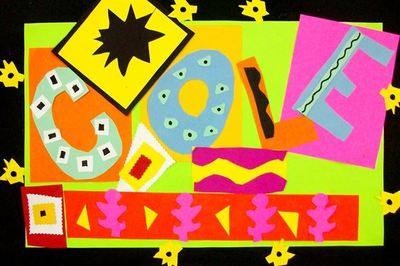 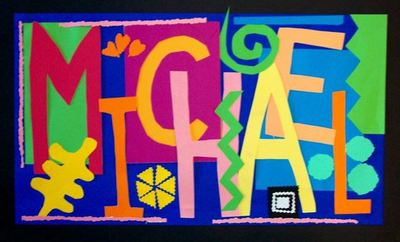 Lesson
1.  Show students the print and ask them what they see.  Talk about the organic forms.  Ask the students what they think organic means?  Organic shapes are irregular, like things in nature, things that have life or grow.  Ask the students why they think this is entitled Beasts of the Sea?  They may answer with: there are shapes that look like seaweed, fish, shrimp, shells.

2.  Talk to the students about Matisse and how he created this work of art.  He would paint paper, let it dry, and then cut out shapes with a very large pair of scissors.  Then he would create his artwork by arranging the shapes on paper.

3.  Explain to the students that today they will "draw with their scissors."  This means they will not use their pencils to draw anything before they cut it out, but instead, they will cut as they go.  Some students will like this, others will ask to draw it first...don't let them!

4.  Show them your sample and explain the steps you took to create it:
-cutting all shapes out first, then arranging on their 9 x 12 paper and adding any shapes they feel are needed.
-do not glue until they are happy with their art and feel it is complete

Art Project
-pass out 9 x 12 black and 8x11 colored pieces of paper. Have them center and glue the colored paper on the black paper.
-pass out scrap pieces of paper for each table (a big stack)
-pass out scissors
-have students start their project by cutting out the letters of their name, aiming for the letters to be about the same size, at least 4-5 inches tall (or larger) - cut them out free hand - don't use pencils to draw ahead of time
-choose a few blocks/rectangles of contrasting colors to add to the background (note how Matisse does this in his own works)
-next have them use other scraps to cut out organic shapes (note: often the students can use both the cut out shape and the negative image left over).  Matisse's iconic shapes that he uses over and over are the spiral shape and the seaweed, leafy shape.
-watch students as they place their shapes and encourage them to layer their shapes on their paper
-when they think they are ready to glue, have them raise their hands and have a parent pass out glue (remind them: "dot, dot, not a lot")
-collect all scraps, scissors, and glue
-please put all supplies back in the art room
-large scraps can go in the scrap basket.  Small scraps can go in the trash! 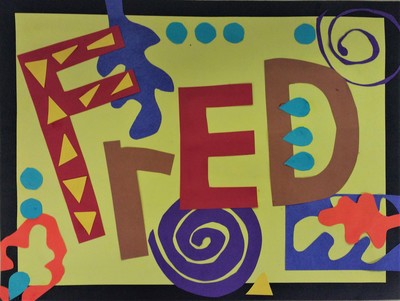