In 1831, Katsushika Hokusai published a series of woodblock prints called "Thirty-Six Views of Mount Fuji" because they all featured the famous Japanese mountain in one way or another.  The series was so successful that he ended up making 46 prints for the series instead of just 36!  The most famous print from the series is titled "The Great Wave at Kanagawa." 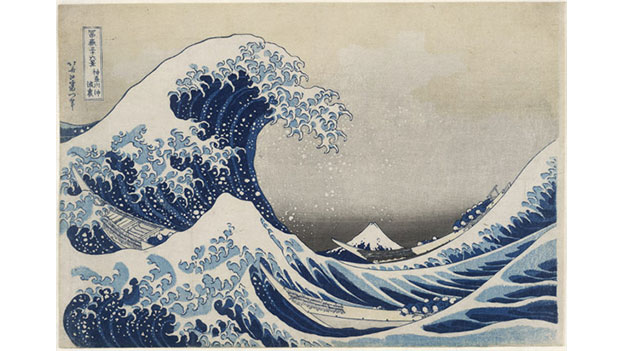 In this picture, Mount Fuji is relegated to a small triangle in the background of a composition dominated by a towering wave, setting up a strong contrast between the two forces.  It also portrays fishermen in their boats caught in this storm at sea.

Hokusai creates a strong graphic impact through his careful design.  He uses the repetition of many elements, including shape, color, textures and patterns.  Can the students identify any of these repeating forms?  For example, the white caps of the waves mimic the snow on Mt. Fuji.  The boats are repeated three times, following similar lines as the waves.  The overlapping and relative placement of these boats also serves to create a sense of depth and distance.  Because the mountain is so small in comparison, it adds to the sense of size of the wave (which is a bit scary and threatening), and to the distance the boats are from shore (which is also a bit scary).  The shades of blue are nicely distributed throughout the image.  The white dots of spray from the wave also echo the heads of the fishermen.  The great wave at left, however, is NOT repeated.  This, along with its larger scale, gives it strength of focus.

Mount Fuji is the largest mountain in Japan, and serves as a sort of symbol for a country that honors nature.  It is also an active volcano (though it has not erupted since 1708), so believers in Buddhism and Shinto feel that the mountain's spirit is strong.  Even though the wave dwarfs the mountain in the picture, the mountain provides the composition with a firm stability.  The eternal and still form of the mountain provides hope and peace that all will be well with fishermen against the raging powers of the waters.  Finally, Hokusai creates a yin and yang to the overall composition, reinforcing the balance of positive and negative, active and passive, the necessity of opposing forces in the world, and how things are interconnected.  It helps ensure the feeling of harmony in nature that this picture exhibits. 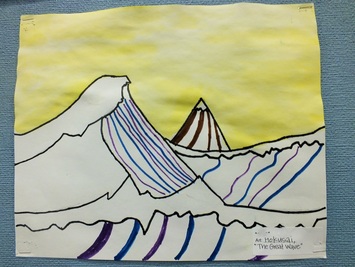 Black Sharpies (check out in office)

-when they are done, have them raise their hand so you can check to make sure they have covered most of the paper and pass out a black Sharpie marker

-when students are done outlining with black Sharpie, have them return the Sharpie to you and get their blue markers to draw their lines in the waves

-let artwork dry on desk or in back of class

*have parent volunteers or students that are done early wash out paint brushes and paint palettes in classroom sink.  Take supplies back to Art room and let them dry on counter. 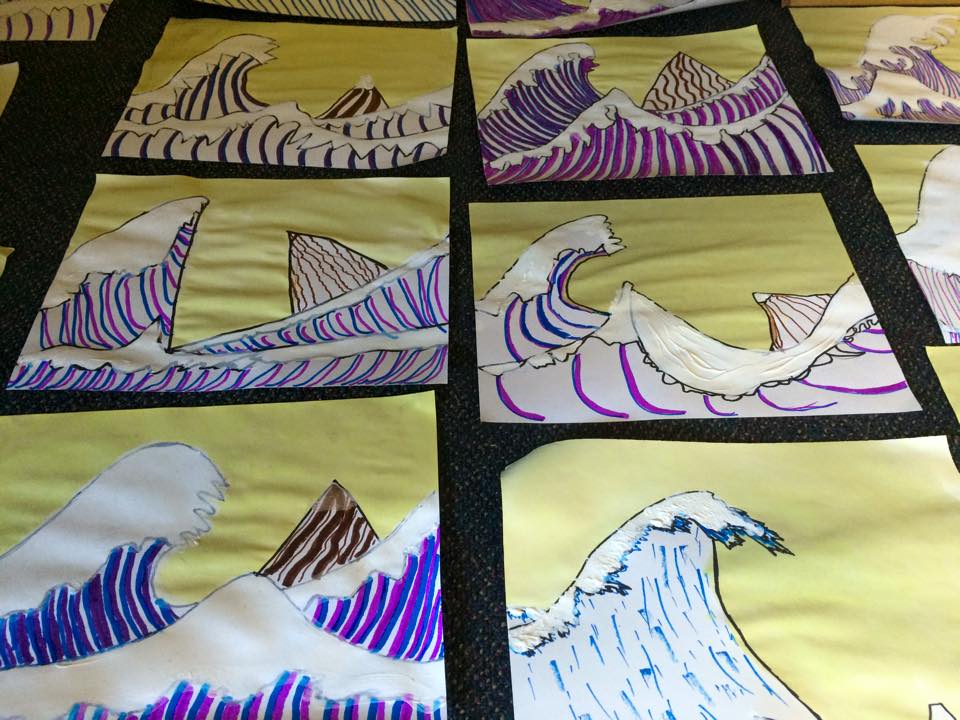