Frank Stella (1936 - ) is one of the most influential modern artists still living.  He is noted for his experimentation in abstraction in painting and sculpture (he decided early on in art school that he wasn't interested in traditional representative art, i.e. art that looks like the natural world).  He also became a skilled printmaker.

Stella focused on the formal elements of art in his work: LINE, SHAPE, COLOR, and composition.  He wanted to minimize not only recognizable imagery, but even the evidence of brushwork.  He always said that a "painting is a flat surface with paint on it."  He didn't want people to make more of it than it was.  He wanted viewers to "see the whole idea without any confusion."  Stella's other famous quote is "What you see is what you see."

In his "Protractor" series (1967–9, with additional works until 1971), Frank Stella introduced the arcs and curves that can be created with a protractor, but also the straight edges as well.  Notice in his paintings how the straight lines provide a framework or stabilizing structure for the curves.  The curves break and reform around interruptions of successive shapes.  Combined with these basic lines, Stella adds a heavy dose of color, some of them overly bright and even fluorescent.  The colors could clash, but Stella always keeps as much control over them as he does the composition of shapes.
These "Protractor" paintings are very large in SCALE, and most of them make use of Stella's innovative shaped canvases, accentuating the curves and making the artworks pop out in yet another way.  These shaped canvases can even be thought of as a combination of painting and sculpture.  The paintings play with space and illusion, giving the appearance the beginnings of a three-dimensional piece yet keeping the surface completely flat.

Each painting in this series is named after an ancient Middle Eastern city; Stella had just visited Iran and took note of the old Persian cities' circular plans whose paths interlaced and interweaved "like snakes swallowing their tails," he said.

One more Frank Stella quote: "Making art is complicated because the categories are always changing. You just have to make your own art, and whatever categories it falls into will come later." 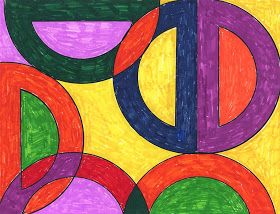 Prep – 30 min. (includes time to do sample, color part of sample, do rest during lesson)

- Black Sharpies (check out in office)

-pass out paper to each student, remind them they will be using their paper horizontally and to put their name on the back

-have students return the Sharpie markers and get their colored markers

-students color in all white spaces on their paper, making sure to not have any of the same color touch

-when students are done, have them return their colored markers into the correct spots in the marker boxes, making sure caps are on 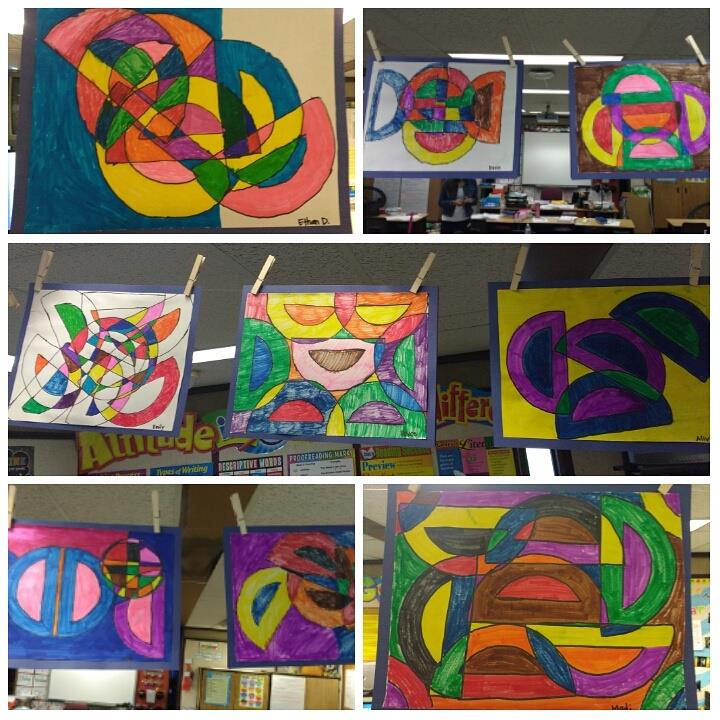