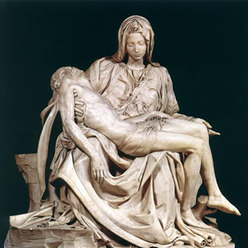 Michelangelo, "Pietà," 1498-99
Michelangelo (1475 - 1564) lived and worked in Italy during the Italian Renaissance.  Along with Leonardo and Raphael, he was one of the three most important and influential artists of his time.  Michelangelo was known as the "Divine One" for the skilled way in which he portrayed human figures.  The Renaissance was a time when people were interested in learning as much as they could about the world around them--in science, religion, mathematics, philosophy, medicine and even in art.

Michelangelo wanted his art to look as real as possible, so he not only studied the way things looked on the outside (and learned about shading and highlighting techniques to add to the illusion), he also cared about how something looked underneath the surface.  We know that he actually dissected dead bodies sometimes in order to study muscles and bones, and the added realism this gave his art was one of the reasons he was such an admired sculptor.  He carved with such skill and sensitivity that the hard marble stone looks like flesh under his masterful artist's touch.   He also believed that sculpture was the best way to create art. 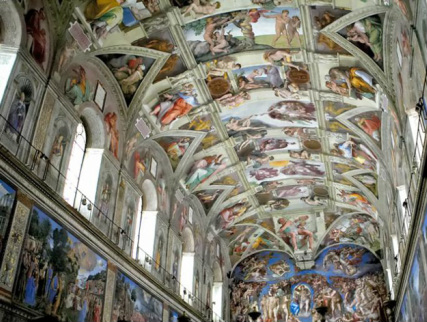 In 1508 the Pope of the Catholic Church asked Michelangelo to paint the ceiling of the Sistine Chapel in Rome.  Michelangelo didn't want to PAINT because he considered himself to be a sculptor, but the Pope was very powerful and told him had to do it.  Michelangelo ended up designing a very complex ceiling pattern that took him four years to paint, working above his head while standing or lying on a scaffold the whole time (the paint would drip in his beard and even in his eyes, but Michelangelo continued working feverishly to finish the job). The painting was huge (141 feet long by 43 feet wide), and contained nine scenes from the Bible down its center and over 300 people. 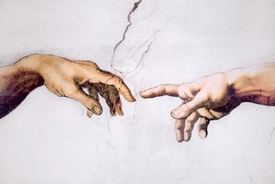 
Note: Many of the figures on the ceiling, including the one of Adam, are not wearing any clothes, partly because of the stories being shown (creation of Adam, Adam and Eve), but mainly because Michelangelo believed in the classically "heroic" beauty of the human form.  For the students in class, focus on the way the ceiling was painted rather than the specific scenes in it.  An overview of the whole ceiling may be shown, along with close-up details that can omit any inappropriate material for young eyes. 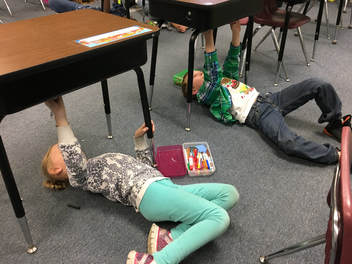 Prep – 30 min. (includes making sample, laying under something to draw would be great if you can)

-have parent volunteers assist students in taping their construction paper under their desk, we want to use the paper horizontally.

-have students carefully lay under their desks to draw the pictures with a pencil.

-while students are drawing, pass out oil pastels to each student, on top of their desk.

-when they are done drawing their garden, have them remove the paper to their desktop, then sit at their desks and use their oil pastels to color in their designs, as well as the background.

-outlines may be added with black pastels at the end, if desired